Thanks for your knickers! 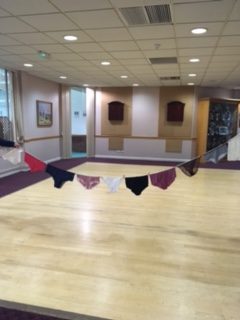 Thanks for your knickers!

Earlier this year I talked to Sam about an idea for making some money for women’s charities and thought you might like to know what happened. 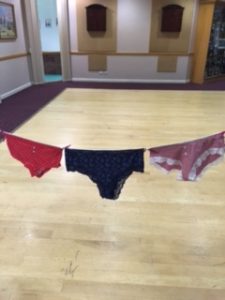 I am really enjoying my knicker bunting project, and would like to thank everyone who has donated so generously.  It is taking far longer than I thought (due mainly to some family issues over the summer, though I have always been an optimist about what I can achieve!).  It is not an original idea (some has been seen in the streets of Dawlish), but I wanted to do something to celebrate the wonderful variety of womanhood: size, shape, colour, lifestyle, etc.  Given that most people would not know what we are wearing beneath our clothes, making decisions on this very personal exercise is based on many different factors such as life experiences, family background, values, choices etc. 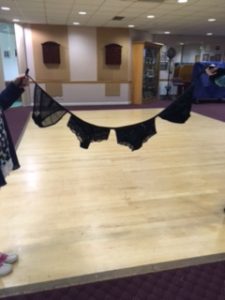 I would like to think that someone would like to own a string of knicker bunting in return for a donation to a women-related charity.  Possibly privately amongst friends and family rather than through social media – what do you think?  Maybe it depends on uptake.  I also see it as a good way of recycling! 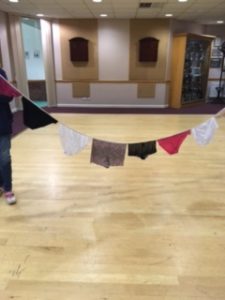 So far I have made three ‘strings’ with a potential further five planned.  This is because people have been so generous with their knickers (far too many to make just one lot as it would be too long and heavy), and also because a few different themes have emerged.  These include two lots of ‘steampunk’ (as a lot of plain black knickers were donated), also ‘prints and plains’, ‘Marks brand’ and ‘colourful’. 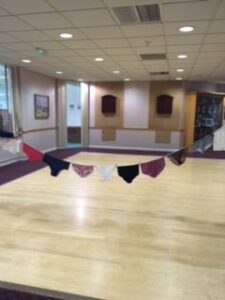 If you have any ideas, or would like to own some knicker bunting, I would love to hear from you – come and find me at Exeter La La on a Tuesday night.