La La Choirs began in Lympstone in September 2008 and is run by Sam Abrahams. The first sessions consisted of Sam and just a few friends. Lympstone closed in 2015 but there are still four choirs with over 250 members on the books, who meet every week. The music is three or four part harmony, generally modern, pop, jazz, world, soul, motown, funk, rock, hip hop and very occasionally religious. Many are Sam’s own arrangements, others more ‘off the shelf’ – but all have that great combination of fun and familiarity with just a bit of a challenge.

The ethos of the choir is simple:  if you like singing and enjoy having a laugh then this choir is for you. Whether it’s weekly, monthly or just when you can, you are always welcome. There are no joining fees and you can pay monthly or weekly.*

*weekly payers are charged at a higher rate. 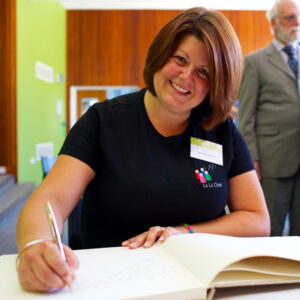 Sam has had music in her life since a small child

Sam has had music in her life since a small child, playing various instruments, singing in choirs, bands, even becoming a semi-pro Jazz singer and recording an album which she still hasn’t released much to the disappointment of her friend, arranger and Double Bass player Paul Moylan. All of this was part time whilst she pursued a rather serious Senior Management career. La La Lympstone was her only weekly relief from what is now the universal stress of everyday working. In 2011 her true creative side regained control of her brain, and she threw it all up in the air to become a full time, self employed music director and started the Exmouth and Exeter choirs. In January 2012 following the success of Exmouth and Exeter, she started another choir in Ottery St Mary.

In November of 2011, she was asked by a friend to direct a surprise song thanking someone for bringing singing into her and her fellow military wives lives. It turned out to be Gareth Malone and was filmed and aired on Episode 3 of the series The Choir. This opened another musical door for Sam and having worked with the Chivenor ladies, she talked a couple of her friends who live locally and whose partners work at CTCRM Lympstone. Having explained how happy the girls were at Chivenor and how much they felt is had helped them get through the hard times, provided an outlet for their worry and given them a chance to share time with others whose lives are the same; they were keen to get together.

Long story short, Gareth contacted Sam about including Lympstone Milwives on the first album and having now performed with Russell Watson, Katherine Jenkins, in front of the Queen, selecting girls to perform at the Jubilee concert in London and record the ‘Sing’ EP.  Sam also directed both Chivenor and Lympstone choirs for album number 2.

Having stepped back from work with the Military Wives in 2012, Sam has focussed on running the increasingly successful La La Choirs in Plymouth, Exeter, Exmouth and Ottery St Mary, seeing ever-growing membership and requests for performances across the region.

Sam has a great sense of community, and she has led La La to participate in many community and charity projects and concerts, raising significant amounts of money for many charities.  Since the start of La La, Sam has raised over £100,000, which includes getting on for £40,000 raised for CLIC Sargent at our Christmas concerts over the last three years.

In recognition of her contribution to local communities, Sam received a Pride of Devon award in May 2017.